I had a renter for the groin vaulted house from the  end of 2013.   However the renter's employer, United Nations, said the area was unsafe and the compound was not secure and she was not allowed to rent the house. So that pressure was gone and  I plodded along with the finishing all of 2014 thinking two more months, two more months, until the end of 2014 when  the prospective renter ended their UN contract and wanted  to move in February 2015.

Now I really had a deadline.  I increased to almost every workday working late afternoons / evenings on the cabinets, light fixtures, curtains, sinks, painting.

Renter is a friend and moved in with me still on some finishing, which is endless, mid February 2015.  I continued on some finishing, until eventually renter friend says "can you move the tools out of the laundry room".  So that was that and I am "done" with the house, for now.

The "finishing" tasks that was the most fun was the "breakfast nook" in the Kitchen.  I named it after a college roommate as I took the dimensions from his "nook" 10 years ago.  Yep, it took 20 years to build this house.

The last month, building supplies, tools, and junk got cleaned up and the vault was live able.  Sometimes friends would stop by in the late afternoon evenings as I struggled to finish the work and couldn't meet up with them at pubs.  I would often work from 4 or 5 until 8pm and then walk home to dinner.

Below is christening the nook one fine evening. 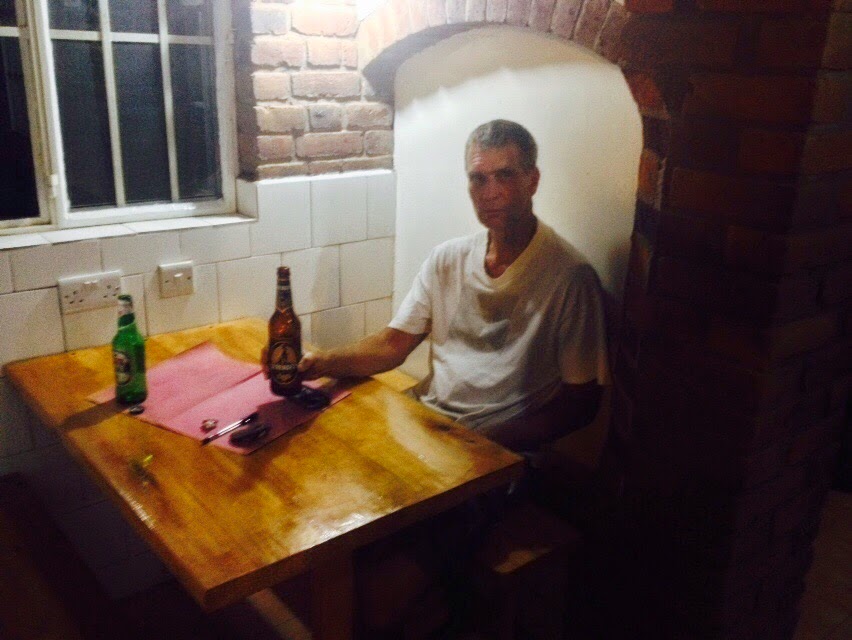 Said renter-friend now translates on piece work for same organization.  She enjoys the house ( it has some stuff that needs work, and I solve that).  However she likes the nook the best, saying she spends the day working in the nook.  power is there, wi fi reaches, kitchen close, light good.

The turning over all the keys and removing the last tools was a big deal, removing that burden of "finishing" from my mind.

Cheers!
Posted by MzunguEriki at 12:17 AM