Vaulted Roof for Kiln, with chimney

Roofing over the kiln has always been an issue.  Corrugated Iron only lasts 8 months due to the wood smoke.  cement tiles deteriorated after a few years.  Lumber with asphalt felt the felt deteriorates from sun.  For ten years i have the asphalt over the wood and replace.  that is expensive and am using old greenhouse plastic.

Now i have another problem.  ten years ago we used only wood for burning.  For reasons of cost, cutting trees, and variability we experimented ( costly)  and ended up putting charcoal dust on every layer.  It works very well and is cheap.  I still needed some firewood to get it going.  Then i found jatropha cake, the "waste" after extracting biofuel.  Someone make briquettes and we can throw them into the kiln tunnels, so we decreased firewood again.  We also used some jatropha briquettes in the lower layers to help the fire move up to t he charcoal dust.

It works good.  New problem.  Jatropha cake has a fair amount of oil left in it and the smoke is not bearable like wood and charcoal dust.  Can't work in the drying sheds above the kiln those two-three days when we burn.  Neighbor house is complaining.

Enter the idea to vault the kiln and add a chimney.  I have no idea how to size the chimney.  What i can find is complicated calculations.

Front and chimney side of kiln.  on left bottom you can see part of one of the six tunnels for lighting fire. 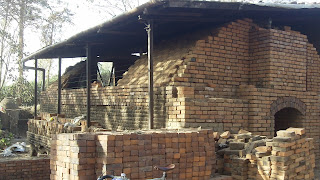 Doors on the sides for loading and unloading.  They are bricked up before firing.  upper door is for monitoring the progress and also loading / unloading.

above lower door is chimney.  WE will see 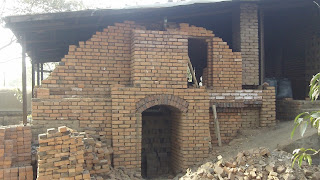 Tried new method of layout of the catenary arch.  Hung chain and then measured every 20cm and transferred the measurements to end walls. 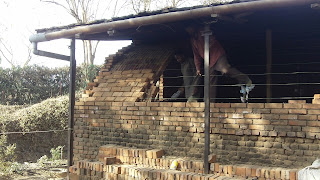 One end got about 2m out and then heavy truck caused many vibrations from road and one arch opened up 3mm.  if it was closed would not be a problem.
Solution below is to put another layer immediately on top. 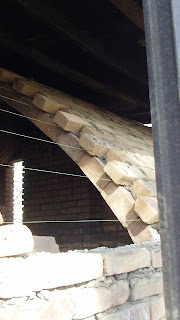 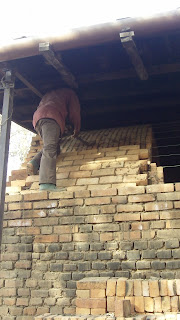 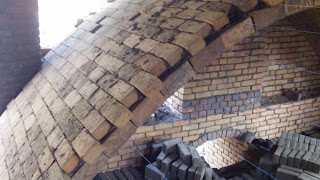 The end without chimney.  Will need to build stairs to upper door. 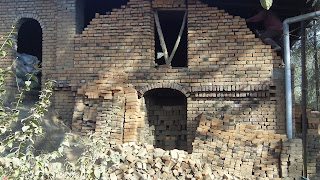 Inside looking at the chimney flue .  It is temporarily bricked in 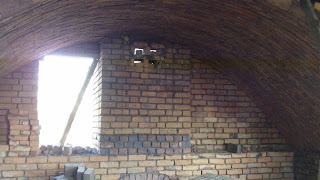 the arches.  it will become black soot some day. 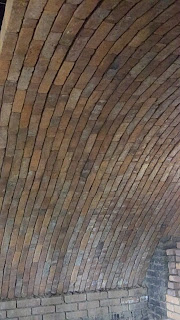 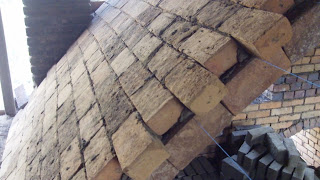 I need to show the butresses.  there is a ring beam.  a bit worried about heat on the cement so am plastering the ring beam with a soil sawdust insulation.
Posted by MzunguEriki at 12:07 AM