Stan Benson is a significant part of my life.  He found me a couple of jobs in Tanzania and encouraged me in what I was doing.  He retired to the USA maybe 20 years ago after spending about 40 years in Tanzania as a missionary.

He was a missionary first in Borneo before coming to Tanzania.  In about 1950 he left Borneo with this crate in the picture below, maybe a year later he came to Tanzania and stayed about 40 years.  (This is my beautiful wife Bernice). 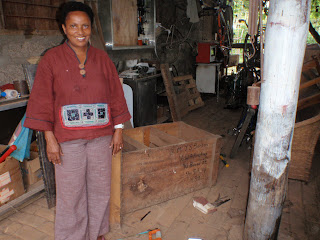 When Stan left for retirement he cleared out all his junk and brought a pickup load to me.  There were many treasures in there, like a box of odd bolts and nuts, hinges, morticed wood boxes that hoes came in,  etc, and this crate.  It weighs allot.  It is the heaviest wood I have touched, including our own loliondo wood.

While farming it  became the chemical cabinet, then it was a box to store scrap metal.  In Dec 2009 I took it apart and tried to remove all the nails.  It was too heavy to move around.  Even the nails were interesting.  Then I planned one board and realized it was beautiful wood.  I looked at it in a different light.

It was on my list to make into furniture, and when daughter Nashesha came back from grade 9 as exchange student she needed another clothes cabinet.  So this was made.  I can barely lift it up.  Planning the wood on the shaper took 4 times as long as African teak.  It has some imperfections but it will last forever and I will think of Stan Benson when I see it.

Thank you Stan for the memories. 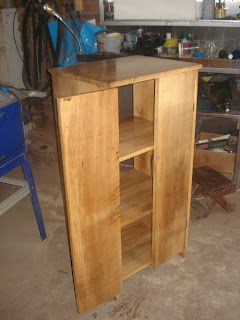 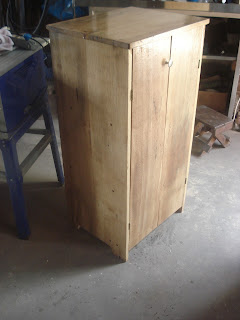 Posted by MzunguEriki at 2:38 AM