The crew have been busy at Kisongo with the Widow's hall and houses (two now) since May.  I got Dickson to add a mason and finally I got Dickson back full time, on the groined vault house for awhile.  ( While the other mason Goodluck puts up the short walls on another vault in Kisongo.

I finally bit the bullet and went ahead this week with a "new" technology for me.  Timbrel or Catalan Vaults.

Where I want to use this technique is on the top half of the stairs in the groined vault house. Where the brightness is up to the top floor. 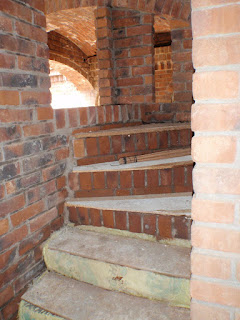 I made a post about this technique, and I tried some trials and found the gypum plaster works for the first layer.

I know how to do timbrel vaults  but the catenary shape can vary, so I kept putting it off  and off and fretting about it.  I bit the bullet a weekend ago and traced the shape on some reclaimed chipboard.  The load on the arch will vary so I worried about that until i realized when someone is standing on it it would also change the line of thrust so i figured at any time the LT will stay within  1/3 of the arch.
So here is from the side, the first of the three layers. tomorrow we remove that chipboard. 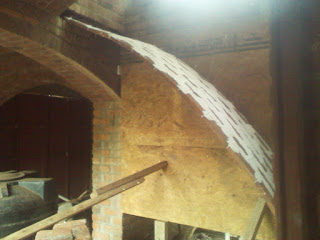 Below is the view from below.  After removing the side "wall" we will add another row on both sides. the plywood is our template and we use that wall to "glue" the tiles.  We need more suport. 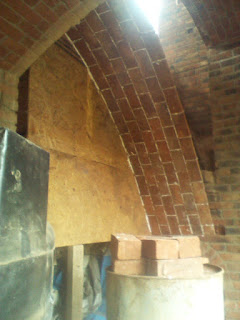 And what it looks like on top of the arch. 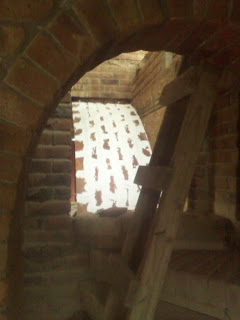 As I said we will add two layers on top of this one, different bonds, and then the treads sit on top of the vault. The mortar now will be cement-lime-sand.  Each layer is overlapping the bond below.  Should be fun.

Edit 7 November 2012:
This is a good link about Timbrel vaults.  It explains more and better than I can.

You too could have a roof/ceiling like this in your house.