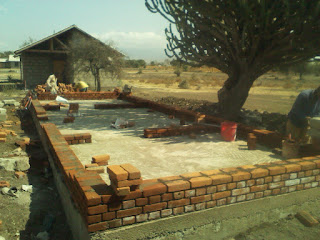 The just completed widow's groined vault project came about because I wanted them to let me build a house using 3 vaults in parallel. Like the Nubians do/did. Instead of the square cinder block in the background.

However when the group came to the brick factory to see a simple vault house, they wanted a Common Hall like the groined vault first.

As Dickson finished the groined vault, before I knew it the project manager had made the foundation for us to build a 3 room vaulted house without consulting us.

But their floor plan without consulting us, so the middle room is wider and they want the entryway in the middle of a vault side and one window. So we ended up going with one long vault. Had to think about how to handle the thrust on the 1meter high wall. It will have a ring beam but "broken" in 4 places, so we will have some buttresses, some beams that drop down to the floor, and the door will be heavy block with a "veranda" acting like a butress.
Posted by MzunguEriki at 10:20 PM