About a year ago we finished building the first roof/floor on a house near the clay brick factory.
This is one of the vaults on the ground floor ceiling.. 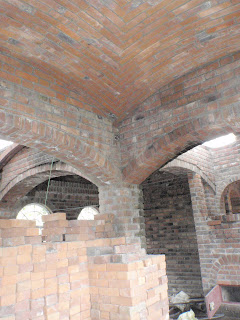 The guy I taught was Robson and he and i worked it out. But he would often be hard to convince ( ie accept whatever I said) of a particular way. I often would get frustrated that they would not follow masonry principles, like using mortar within 20 minutes etc.

A neighbor begged to use him, he went for some weeks and came back. then he said he had a big job in Babati and he went but would come back. He never came back, first he would postpone and eventually he stopped picking the phone.

So Makalla found me Dickson. He is slower but in the end I think he will be better. So i had him try a small vault spanning 1.5m to cover a bathroom.

So after about a year and all the time worrying about it we started the first floor (2nd to Here ) roof. which is a groined vault starting from the cornors and 6 meters wide. steep.

Below is to the the first floor walls. We dont build to the cornor becuase the vaulted roofs will start in the cornors at floor level. 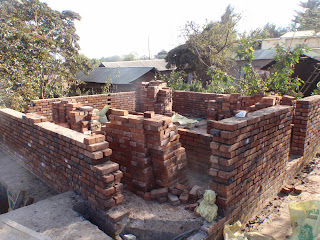 TThe gap is the cornor of the room. Below is the shape of an end wall. 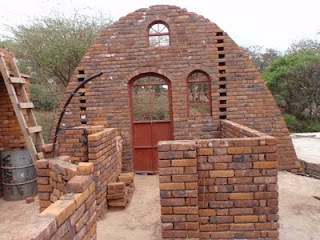 Looking at the same wall in profile and the second wall. 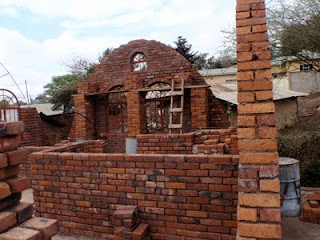 So at this point I kept waiting. and waiting for robson. Depressed me and made me mad.

So I started all over again with Mr Dickson.


I couldnt be there all the time and wasnt sure myself how to to the groin. those standing up was me thinking we need to start going vertical right away 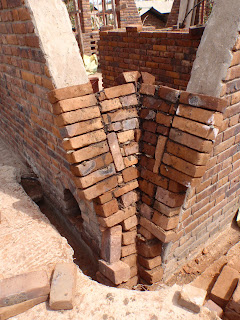 then we figured out how to cut both. so this cornor we tried everythign. probably shoulod of ripped it out. after all the expericments. structurally it is okay. 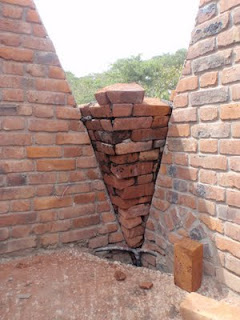 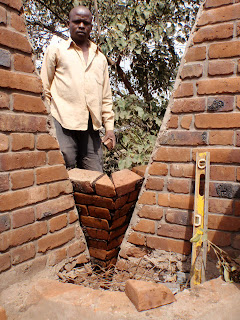 and here below we started cutting them both but having joint in the groin. then the last five courses we did an overlap, just cutting the top off the one being overlapped. it leaves a cavity which we will fill later. 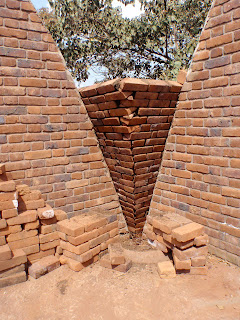 from the outside it looks really good 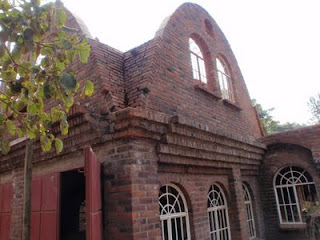 Posted by MzunguEriki at 7:23 AM